You Missed These Lessons from
Halloween
town
in 2020

The first of the Halloweentown movies aired over 22 years ago, but that doesn’t keep this festive movie from hopping across television screens, filling our rooms and hearts with a warm, orange hue- even during the seemingly traumatic year of 2020. While the United States (and what feels like the whole world) is watching the election, we can look at advice from Disney movies to root us on, especially from the colorful spirit of Halloweentown.

(…that some people totally missed in 2020, based on election results.)

Accept People for Who They Are

Marnie attended Halloweentown High during the third Disney movie and wanted to expose her non-mortal friends to an average high school. She thought it’d be beneficial for both parties, but was thrown off when neither the so-called “freaks” nor the humans wanted to embrace the other side of life.

What we learned at the end of the movie is that people should be accepted for who they are. So what if your crush ends up being a pink troll or an ugly human? It doesn’t matter the world they came from or the physical appearance they take on. And remember, Dylan and his pink troll of a crush ended up realizing their differences were just too weird. They took different paths but still allowed the other person to be who they were, without hate or judgment.

Believing in Magick is Cool

On that night Marnie told us all, “Halloween is cool,” and we never forgot it. But we seemed to unlearn that Magick surrounds us all of the time, not just when the portal is open.

Believing in Magick can look like a lot of different things. Magick is having faith that something exists beyond the physical and it can be humbling, powerful, and even live moving. Here’s how you can practice Magick and exude the spirit of Halloweentown.

Embrace Your Ancestry and Heritage with Pride

Aggie and Marnie are proud to be Halloweentown citizens. Never do they try to hide their roots nor their identities. Actually, Marnie felt attracted to the oddities of life (and those beyond it) before she even knew she was a witch! Do you feel the draw of your ancestors like she did?

If you don’t feel that pull, that’s okay. At the very least, Marnie and her family stuck up for each other when Kalabar was trying to turn their mother into a sticky frog. At the end of the day, all of us should be proud to love (and one day hug) our family, friends, and heritage.

Women are Better Together, and Strong AF

Remember when Marnie kinda sucked and needed her little sister to step in and help cast a spell? It’s a nod to the secret that women are better together. And together they are strong as hell. Using a little Magick and a lot of positivity, we can dust ourselves from the last four years and rise up, hand in hand; just like when Marnie saved Halloweentown from Kalabar.

Remember, a woman can (and probably will) save the day.

Power in the Wrong Hands Can Be Dangerous

As we’ve seen in struggling countries and huge corporations (even churches) across the world, power in the wrong hands can be dangerous. And too much power can be super sketchy. When Kalabar gets a taste of a bit of control, he freaks out and wants the Cromwell witches gone, despite there really not being a threat to his ego…. At all.

We need to watch out for ego-driven leaders who’d rather watch their reflections in a dirty pond than lead the masses to a lighter existence. Dare I say, we ought to have a system in place to somehow negatively reinforce those who use their powers for dark reasons.

After 2020’s weird occurences, the underground injustices in other areas we don’t hear about, and of course the treacherous U.S election- we might be a little keener to recognizing and calling out bad leadership when we see it.

Those are the Life lessons from Disney Channel’s Halloweentown that you might have missed.

May the light shine ever upon you, from the Spirit of Halloweentown!

“Being normal is vastly overrated.”

“Magic is really very simple; all you've got to do is want something and then let yourself have it.”

“A pentagram. Lon Chaney had one of these on his hand when he was bit by that werewolf."

"I've always said that the movies could teach us so much.”

"Oh yes, I am, no thanks to you. You were going to let my powers go away forever.”

See my accompanying guide on IG.

*This is just for fun! Please have a laugh with me, and okay.. a bit of self-reflection. 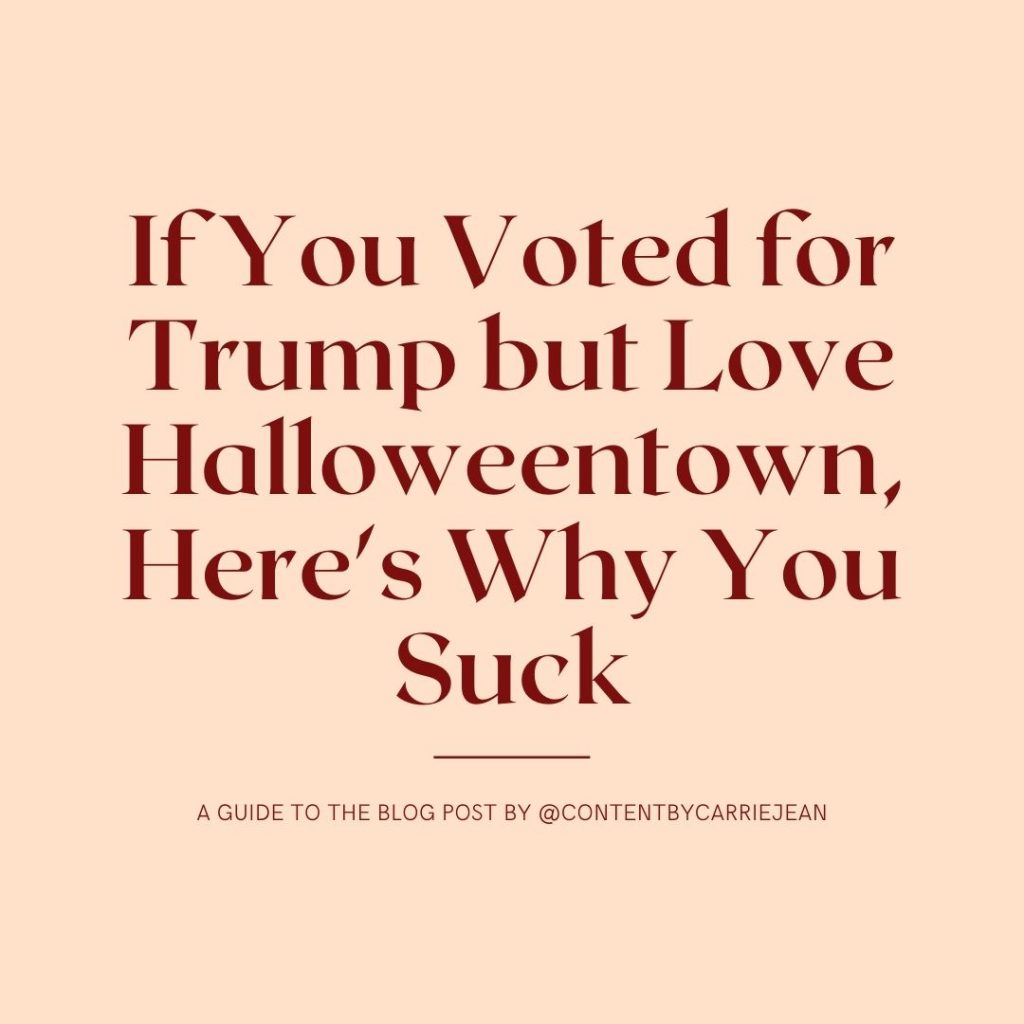 Did you laugh? Please validate me by commenting below.

Or, do you need a writer for your blog? Reach out for a free discovery call on how I can help you get more traffic and more money!

4 thoughts on “You Missed These Lessons from Halloweentown in 2020”